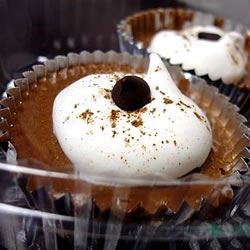 “This is one of the best chocolate mousses I’ve ever tried. It’s so creamy (o.k. probably extremely fattening but holiday calories never count, do they?)I personally make the mousse without any alcohol added. Garnish with whipped cream and chocolate shavings for an extra special effect.”