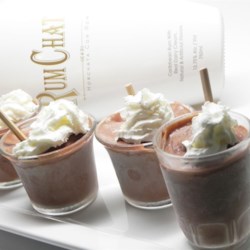 “These are even better than Jell-O(R) shots. You could also serve these after dinner in place of dessert.”