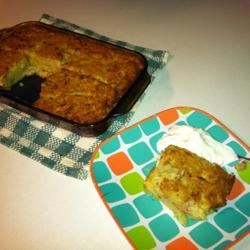 Recipe By:J Sell Sr/Jr
“This is a Lithuanian dish that my family makes mainly during the holiday season. It goes great with ham or turkey. It is also served in many authentic European restaurants. This recipe is time consuming but well worth the work put into it. This is a ‘stick to your ribs’ dish and is in no way considered lo-cal or healthy. A dollop of sour cream on top of each piece is a great topping.”