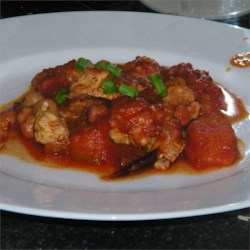 Recipe By:Bubbe
“I needed to use up some chicken, and we had been given a lot of pumpkins…so I began to look for a recipe which would take advantage of my ingredients. However, everything I found was quite spicy and knew would not go over well with my grandchildren. I then came across a recipe which seemed to have promise, and used it as the basis for creating this…a new family favorite! I hope you enjoy as much as my family did.”